Let me start out by saying I thoroughly enjoyed the movie, and if you're a SciFi buff like myself; go see it. Well written and directed, it craftily avoids most SciFi cliches, uses the special effects sparingly and with excellent results, and gets great acting out of its cast. Natalie Porter nails it as a soldier scientist and demonstrates why she is becoming one of the best actresses in the industry. 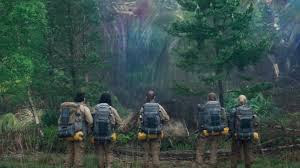 Disclaimer: if you haven't seen the film, I will try to avoid specific spoilers, but I will be revealing things that you may not want to read about till after the movie. If that is the case, bookmark this and return after the film.

A meteor-like an object strikes a lighthouse in Southern Florida, creating what they call a 'shimmer.' People go in to investigate, and nobody comes back out. Until Natalie Porter's husband unexpectedly shows up at their house after having disappeared for a year. The Government snatches her and her now sick husband to a top secret site just outside the growing 'shimmer.' Natalie Porter's character (Lena) and five other women go into the shimmer to see if they can stop the alien expanse.

The characters of the film do not espouse any religion and are modern in all aspects. Children are not heard and not even seen. Lena jokes with her husband about God in a brief scene and the head of the group, Dr. Ventress, portrayed by Jennifer Jason Leigh (man, when did she get older?) verbalizes the humanistic viewpoint that our destructive impulses are biologically wired in our DNA. This point is driven home by revealing a failing of Lena and that all of the women chosen for the expedition have serious flaws.

I give the film kudos for acknowledging the fallen state of humans. Christians call it sin, and while agreeing we are born with it, we identify it's source as our rebellion from God, not from an unknown hereditary evolutionary trait.

As the women encounter genetically altered monsters inside the shimmer, they begin to realize what the shimmer is actually doing. This revelation is pivotal to the film, and it reveals an alien that is true to the evolutionary theory of what humans should have been; mindless, no conscious beings who merely exist to live with no definable purpose. This is the film's message; life just is.

Nobody really believes this because very few people actually live this way. If they do, they are called sociopaths and are usually locked up for long periods of their life. Humans look for, no crave, for purpose in their lives, even humanist and materialist.

It's solution to the dilemma of the fallen state of humans is telling. Mankind must be transformed to a new creation; this time from a mindless, purposeless (as far is revealed) alien. You know, this sounds vaguely familiar.

It's called the Gospel. Humans rebelled against God, fall into sin. God sends his Son, Jesus, to transform those who believe by Love into, eventually, eternal beings with incorruptible bodies. But God is no purposeless, unfathomable alien. He is our creator, is in love with us and made way for us to be reborn into eternity.

I enjoyed Annihilation and its story of fallen characters looking for truth and transformation. I just like the Gospel version better. 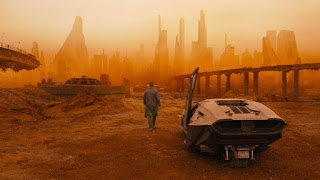 If you can handle three short scenes of nudity (one is an animated ad that is sexual, the other so clinical to remove any sexuality, the third very brief), then you need to see Blade Runner 2049. It is a beautifully crafted film. Running at 2 hours and 45 minutes, it starts slow but accelerates to a breathtaking ending. The acting, writing, and effects are excellent and come alive in some of the most stunning cinematography I've ever seen of which it should win an Oscar for.


It is also the most disturbing film I've seen in ages. I warn you, if you do see it, it will attempt to suck every last essence of hope in your Spirit. So why would I recommend that you see it? Because it is the quintessential humanist movie. If you want your agnostic, atheist friends to have their worldview smacked into their (and yours) face, then have them watch this film with you. It's not pretty.


In Blade Runner 2049, the world has suffered a major ecological disaster (the one the global warmers have warned about for the last fifty years and fortunately has not occurred). Trees are gone and animals nearly non-existent. Food is grown in protein farms. Humans are cloned in vats and are called 'Replicants' who are used as slaves and considered soulless. Ryan Gosling does a great job portraying one who is used to hunt down an older version of the Replicants who went rogue in the first movie.


The movie takes place in the greater Los Angeles area. A great wall has been built to keep back the rising Oceans and Las Vegas was nuked with a radiation bomb. The city is filled with apartment complexes that have small apartments built like safe rooms to keep out the residents who literally reside in the stairwells. It rains constantly. The law exists but is barely keeping things together and is overruled by corporations which pretty much do what they want. Nine worlds outside Earth have been colonized, however, although not stated it is pretty much understood; only the ultra-rich have left, and hints from the first movie indicate that there is war there also.


In short, a dystopian nightmare.

Francis Shaeffer, in his book, "The God Who is There" discusses a 'line of despair' that modern man crossed when he discarded God and Biblical Truth.  If there is no God, then there is no truth except which that he creates himself and man can never verify that what he creates is real. Blade Runner takes that philosophy and slaps us, repeatedly, in the face. Harrison Ford states defiantly in the film, "I know what is real!" but we, and him know it's all bravado. The film painfully tries to find truth and reality in a world collapsed with no religion and no moral code. It is difficult to watch.


There is a nice plot twist and I won't spoil it. The Replicants become the center of the story, and possibly the hope of the future. Soulless machines who can kill without remorse and are free from any moral constraints become the heroes. Why not if a man is not made in God's image but is simply an accident of the Universe?


Blade Runner 2049 has barely made $200 million in worldwide box office sales. Why? I was in a theater that was about seventy-five percent full. When it ended, you could have a heard a pin drop. No one likes to see the full implications of their worldview played out, albeit it beautifully, in front of them for three hours, even Christians. The Biblical worldview ends in hope; it doesn't remove the pain and despair we will feel at times in this fallen world but it offers peace and joy in the midst of them and a promise of a future and eventually ultimate redemption.The humanist philosophy as Blade Runner so aptly portrays, will have none of that. Life without God is indeed hopeless and offers no comfort from pain and trades the assurance of reasoning and truth with despair that comes with the lack of a concrete reality.
Posted by Unknown at 12:33 PM No comments: