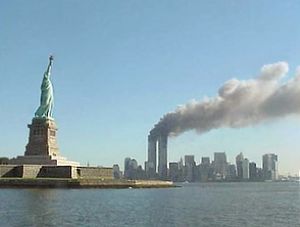 On September 11, 2001 Islamic, al-Qaeda terrorists turned four commercial airline jets into fuel laden flying bombs and destroyed the Twin Towers in New York, a large section of the Pentagon and if not for the heroes on Flight 93 who willingly sacrificed their lives; the White House. 2982 people tragically lost their lives that day; more than the day of infamy at Pearl Harbor. Nine years and two wars later the effects are still being felt world wide.

Did we, and when I say 'we' I mean all of us, collectively, as the most advanced and wealthiest civilization ever to exist in the history of the world; did we learn any lessons from that day?

I think we did, but I think we are hell bent on forgetting them. I think we want to bury that day away and to leave it in the ash heap of history to continue forward like the good old days when death did not rain down from the sky and steal away fathers, husbands, wives, mothers and children without any warning. We want our security back. We want our illusions.

Oh and how wonderful those illusions were. We lived in the most prosperous society in the history of mankind and the most peaceful. The world's super powers had not been at war for over fifty years, for the first time in human history. Science had promised nearly everyone a full, long life with people living regularly past eighty with an active, viable lifestyles. Doctor's long promised cure for diseases was starting to come true; it didn't matter if you had taken the highway to hell just take a pill and everything would be cured. Technology was producing an economy that was going to make everyone wealthy and that which couldn't be bought would be available for free. Man's long sought nirvana was well on its way.

My how things have changed.

Iran is acquiring a nuclear weapon and being sponsored by China and Russia who perform joint military actions together while Islamic fascists threaten to embroil the nations into another world war. Science is discovering that diseases can be more difficult to cure than we thought and the swine flue gave us an ugly reminder that new nightmares are just a mutation away. We are finding out that medicating medical problems for long periods of time causes their own side effects which can kill you just as quickly as the original problem and that the mass produced foods that we are consuming may be causing health problems like obesity and hormonal imbalances. Did I mention that we are finding out that stress will kill you quicker than anything else and how can you not be stressed these days?

That wonderful technology bubble burst and hard. The economic growth that would never end and would eventually make everyone rich cannot even produce jobs in the worst economic recession since the Great Depression. Wealth at a never before seen magnitude was lost in record time. Our Government has proven itself incapable of even fulfilling an election promise of simply providing much needed hope.

There is a tendency in a wealthy society for people to think that everything is going to turn out well for them. Society has always had an attitude that their way of life will always be around and that it can always conquer the challenges it faces and find solutions to problems that threaten its existence. 'We will always overcome'. The problem is six thousand years of known human history au contraire.

On that tragic day terrorists didn't just destroy buildings and lives they destroyed our illusions of safety. We always believe that if we just do the right things; eat the right foods, exercise, drive cautiously, be green, recycle, reduce global warming, save the whales, save the dolphins, reduce our carbon footprint, use alternate fuels, be racially sensitive, divorce our old wives and marry that young thing, find the perfect spouse, get cosmetic surgery, if we are just good enough then we will avoid that thing called death.

When those twin towers of our economic might and power fell we could no longer deny that someday death too would come knocking at our door, and probably not when we are ready. Our reaction to 2900 plus deaths was disproportionate to say the 40.000 plus who die annually in automobile accidents. Our hidden horror was these people were doing nothing more dangerous than showing up for work and within hours some were jumping forty stories to their death to avoid being burned alive.

This is the lesson of 9/11 that our society refuses to learn or acknowledge; there is no hope of avoiding death. It is coming and when you least expect it.

And yet, I have good news. "For God so loved the world that he gave his only begotten Son, that whoever believes in him should not perish but have everlasting life." (John 3:16). Maybe that verse doesn't seem so contrite now.

September 12 is my birthday. Every year now I am reminded that in one horrific day three thousand people perished and every year I am getting closer to taking that trip. My birthday wish is that you will learn the secret that I have learned; God loves you, God has forgiven you, and God has life for you. That you will accept Jesus as your Lord and Savior and so when death comes knocking on your door you will have the will, authority, audacity and hope to tell it to go to hell. Because you won't be there thank you very much.
Posted by Unknown at 9:11 AM 4 comments:

I own a business and I travel. A lot. I have a 2007 Honda Accord that has 260,000+ miles on it*. I like driving and visiting people; if you want to see me shrivel like a neglected potted plant make me go to the same office every day. However, this lifestyle has some serious drawbacks of which one is the constant eating out. It's a miracle that I am not more overweight than I already am.

Due to the recession restaurants are having to slice prices to keep their patrons returning and I have noticed a trend; smaller portions. At first it bothered me as I was paying less for my meals but the meals were getting smaller and smaller until I was looking at a five dollar lunch that consisted of two palm sized burgers with five dainty shrimp strewn across a pile of spinach leaves that would barely fill a tea cup. Incredulous, I looked up at the waiter to say something when the Holy Spirit told me, with the usual difficulty it encounters, to shut up. I sat stunned and eventually managed a weak, "Thank you".

As I looked at the meal which would barely feed a gerbil much less a six foot two fifty two inch chest male I begin to become convicted of my attitude. There are millions, literally millions, of people in this world that would trade places with me in a heartbeat. How did the six hundred plus calories sitting in front of me become not enough? How did I manage to grande size my entire life to the point that when presented with smaller portions instead of thanking God for my blessings I immediately acquired an attitude that it was insufficient?

I am asking these questions as I think about our society and our wrecked economy which is at its lowest point since the Great Depression. There is no denying that people are financially hurting. What I wonder is how much of it within the Body of Christ was self inflicted? Was our quest for bigger houses, nicer cars under the guise of being 'blessed by God' really hiding our fleshly desire to super size our lives? Did we get caught up in using credit cards to get what we wanted now to end up paying for it later? Did we begin to believe that God was a debit card existing to finance our lifestyles? I think we did. I know I did.

I wonder how much of what God is allowing in our society has to do with bringing the unbelievers to repentance (it's working, Church's are growing again) as opposed to educating the body of Christ as to why we need to be good stewards of our finances and resources. My guess is that God is probably getting a twofer here. Get the heathen's attention that they can't trust the riches of this world and teach his 'flighty I will take the charge card and run the bill up to get things that I don't need while the world is dying around me' Bride to be a lesson in financial stewardship.

God wants us to have the big dreams and to do great things for the Kingdom of God. "Most assuredly, I say to you, he who believes in Me, the works that I do he will do also; and greater works than these he will do, because I go to My Father." (John 14:12) But God also wants us to be good stewards of the resources he's already given us. We have an opportunity in the challenge before us to learn to discipline our appetites and to make do with smaller portions so that when the blessings flow again we can use the resources to grow the Kingdom of God; not our bank accounts, the number of our possessions or the size or our waistlines.

For me personally, I am working on reducing my waistline and we are on track to be completely debt free by 2012.

*On a side note, if you want a reliable car get a Honda. They are made in America and the only thing I've replaced on the vehicle is the radiator fan and the battery. I'm not making this up and I didn't receive any money or favors for this endorsement, but wish I had thought about it first :).
Posted by Unknown at 9:02 PM No comments: