You've probably already heard but apparently people are accusing Perez Hilton of posting pictures of Miley Cyrus on his website wearing a see through dress without any underwear and apparently all can be seen. The problem for Perez is that Miley is seventeen years old, a minor, so if the pictures were real then legally it was child porn and Perez is in deep trouble. No one knows for sure because Perez had them scrubbed from his server the same day after being accused of child pornography and immediately claimed that she did have underwear. Nice to know there are still some laws on the book that have teeth.

I'm not here to rehash whether Perez committed a felony nor here to discuss his character. It is interesting to note that this is the same Perez who verbally assaulted runner up Miss California in the Miss USA pageant after she gave an answer not to his liking about homosexual marriage.  I'm also not here to discuss my disappointment in Miley Cyrus and her all too revealing outfits.

What I want to discuss is our societies perversity of turning young girls into sex objects.

Before we begin this discussion there is one very important fact that we (particularly women) must understand about men. Once you understand this undeniable fact (because you can poll one thousand men about this and nine hundred and ninety five will agree with me and the other five are lying to impress you) then you will fully understand the dangerous waters that we are wading, nay, plunging into as a society.

The simple fact about men is when it comes to sex is that we are visual. Period, end of story and debate. If you are a married women you may have noticed that when you walk around the house naked you husband will attack you. If not he either has health issues or your marriage has serious problems. God made men so that it is the eye that attracts and trust me, don't think you have to have the curves of a supermodel to get his engine running.

Now I know women everywhere went, "I knew it! Men are all dogs!!"  I want to take a moment here to defend the good men in society. Men are not dogs. Men who sleep with everyone they can are dogs and give the good men out there a bad name. That's like saying because there are women who like to sleep around then all women are sluts. Just because a man sees something visually that he likes doesn't mean he has the right hit on it. In civilized society men are expected to show restraint, married men are allowed to go to only one well. Not all women are sluts and not all men are dogs.

Men do have the ability to admire the beauty of a women without lusting after her. When a man looks at a women and says to himself, 'Wow, she's beautiful', at this point he has not sinned. He is simply admiring her beauty, say the way I look after a 2010 Dodge Challenger (Wait, that might not be a good example). However, if a man looks a women and then begins to imagine her in a sexual way he is lusting and according to Jesus, has committed adultery in his heart (Matthew 5:28). I know you women out there want us to be attracted to your bubbly personality and winning heart but I am here to tell you it's what we see that catches our attention. For most men what we see is not enough to enter into a lifetime commitment but it does make us curious enough to find out if there is the other characteristics we are looking for in a mate (as was in my personal case).

Now past (and some present cultures) understood the effect the naked feminine body had on a man. Hence floor length squirts and it was scandalous to show an ankle; a thigh and a women was slut. Both Islamic and Christian extremes have unjustly blamed women for what they possess and have sought to severely restrict any view of the female flesh whatsoever to the point of head coverings. I don't think we should go back to severe restrictions on feminine fashion (we forget, it was just a hundred years ago it was dangerous for a women to show up wearing pants). But the pendulum has swung way, way too far the opposite direction and now we are endangering our children.

There is a fantastic water park within an hour from where we live and every year the family goes out and we have a good time. What I saw this year basically shocked me. If being shocked seeing 13 - 17 year old girls walking around in bikinis so tiny and revealing that they may as well have been naked makes you a prude then for me it's official. Most of these girls were not skinny prepubescent sticks either, they easily could have passed for older women if not for the baby fat and childish behavior. I was constantly looking at my feet the entire day but many men were openly lusting.

The question I have for the parents of these children, at least I think so, is fair: "Who the hell let these kids out dressed like this?" I mean really, get a clue. You think your daughter showing that much flesh is not going to be attracting unwarranted attention? Pedophiles and child molesters are looking for young women to exploit and you are apparently willing to provide the bait. Children in that age group have absolutely no business dressing that skimpy in public (much less mature women).

Disregarding the sickos in our society looking to hurt your young daughters what about men such as myself, faithful to our wives and respectful to women (open the doors for them, let them ahead in the line, etc) who train our minds not to go where its not suppose to go and your allowing your daughter to basically stand naked in front of us. We are honorable men and we won't do anything but don't expect us not to be disgusted.

What is frightening is that dressing girls in tight shirts showing cleavage with shorts that ride inches from the pubic area is becoming the norm. I have a twelve year old daughter and we are disgusted with the current offerings for girls from the ages of 10 - young adult. We have to shop and shop and shop just to find clothes that we are somewhat satisfied with. There is an apparent attempt by clothes designers to cloth young women with as little as possible.

When a women dresses in such a fashion that she is showing cleavage, belly, shapely legs and tight clothes that leave no imagination to the shape of her body whether she knows it or not she is advertising that she is sexually available. When women wear makeup they use blush which simulates flushing of the cheeks and lipstick which simulates the way their lips flush during sex. If I walk into my bedroom and my wife is dressed in lingerie with high heels and stockings and wearing makeup I don't look at her and say, "What a wonderful outfit. That really goes with your skin tone and hair color." I pounce. My wife is advertising her desire for sex and who am I to deny her?

When you send your little girls out in the world dressed in such a way that previous generations would have labeled them sluts their little bodies are sending signals to men that they are sexually active and when you let them wear heavy makeup it doubles the effect. Many men walk by and say, "Who am I to deny her?". You are allowing your daughters to dress inappropriately and provocatively.

Now I want a disclaimer here; no woman, regardless of how she dresses deserves to be sexually abused, manhandled or raped. I don't care if she is standing out in the street naked; if I see a man treat a woman that way my wife will probably be bailing me out of jail. No woman deserves to be hurt in such a fashion, period. But men deserve the courteousness of women dressing modestly. Women can wear pants or skirts and tops and come off pretty and not as a sexual billboard. Any men who protest this of course have one thing on their mind. I mean, come on women out there, who do you think invented the bikini? It was two Frenchmen of course!

But what is really disheartening is how nobody speaks against this discerning trend. If you are a full grown women and you want to display your flesh in all its glory then so be it but don't wonder why you are always attracting the wrong type of men. Allowing your children to dress this way is unconscionable. Do not let your daughters out the door without a clothes inspection and do not negotiate. Set boundaries for your child and stick to them and it helps if you model the rules yourself. I think a lot of this has to do also with too many fathers not in the house. If you are a father and you wife is allowing your young girls to dress this way she may not be doing it on purpose. Many women just don't get the visual aspect of a man's sexuality (I guarantee you I will get many women posting on this blog complaining that it shouldn't be this way. Sigh.) Please set your daughter and wife down and explain how men look at women. Be brutally honest. Set standards and enforce them.

Now I know some of you think that I am being as shrilly as Perez Hilton about turning our children into sex objects. So I want to show you some pictures I took at the mall the other day. 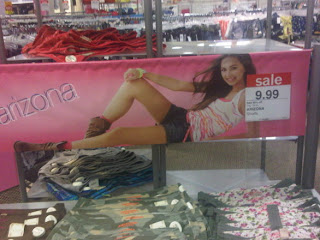 The above picture is right in the front of the store as you walk in next to this one: 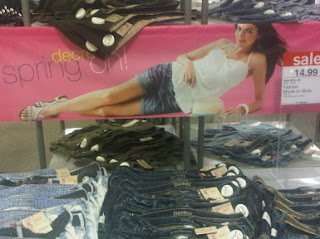 Now your probably thinking this is the area for young women. Nope. Your wrong: 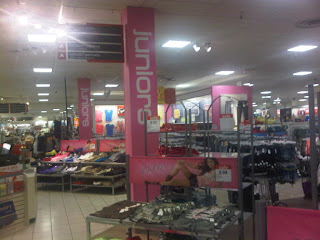 It's the Juniors section. THE JUNIORS. Notice how the younger girl (picture one) is in the more sexually suggestive position and is showing more leg than the older girl (picture 2). This is a major department store who shall remain nameless to protect the guilty.

Perez Hilton may be a menace to society and if Miley Cyrus was indeed flying free that day he had no right to publish those photos. But he is dead on when he shrills about young underage women dressing inappropriately. We as fathers and mothers need to protect our children and stop our society from turning them into sex objects. They deserve their childhood and we need to fight for it.
Posted by Unknown at 7:41 PM