But it is time.

Christians, including myself, can trick themselves into thinking that the sorrows of this world will somehow not camp themselves on our doorsteps. We believe since we give our lives for God and the Body of Christ somehow that we are spared from the nightmares of this world.

So yes, even as a Christian it still sucks when your house burns down.

On Sunday September 4th my family and I returned from teaching Sunday School at Shoreline South. We had had no rain for literally months and as we drove back to our house we noticed with a dreadful feeling in the pit of our stomachs the fierce 35 - 40 mile per our winds. The conditions were eerily similar that caused the first fire in 2008 which came within a thousand yards of house and burned many of our neighbors homes to the ground.

My wife went to drop off our son with a friend in Smithville, TX and as I was in our house preparing lunch I smelled smoke. I followed my nose and went outside and was greeted to the sight of a huge column of black smoke in the North West sky. I called my wife and told her to get home and I went in the house to start packing.

Sure enough, as we argued with our neighbor across the street that she needed to leave (she survived the first fire along with us and thankfully listened to us and left) the Sheriff came by and using impolite language notified us that we needed to vacate henceforth immediately. Having packed one suitcase for each member of the family (My wife, daughter, son and Grandmother) we loaded the care and headed out.

Side note: If you are ever in that situation forget the clothes. They can be replaced. I would have grabbed pictures and the true valuables like the lamp that had been in the family since the late 1800's. Clothes can be replaced. Grab the things that can't be.

We went East on Highway 71 and stopped at the La Cabana restaurant parking lot where the fire evacuees where congregating for moral support and, as the fireman were using the adjacent gas station a place to try to gather desperately desired information on which streets were burning and which weren't. 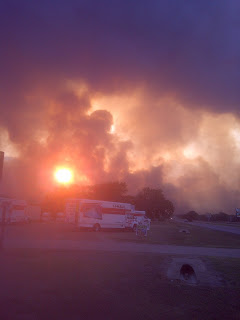 We watched with dismay as the fire moved further and further South West until it was obvious that we could not stay at the restaurant and we would not be going back to the house. It was then that the miracles started.

We received a phone call from a really good friend of ours that she wanted to put us up in a hotel for two nights. Grateful, we took the assistance and headed for San Antonio as it was nearly impossible to head North or West. The card was crowded, my wife was driving and we had my son's five month old Basset hound sitting on the backseat floorboard between my legs. On the way to San Antonio his gastric juices in his stomach decided that they did not like the constant motion and he proceeded to projectile vomit a gallon of fluid all over my legs.

Raising my hands to God I shouted, "Really!!? Really God!!?"

After we stopped so I could change my clothes we got to the hotel and then took the dog to my wife's nephew in San Antonio. As we preceded to get ready for bed my wife had this exchange with my daughter:

At this point I must declare that my daughter Gabbie gets the 'Thinking on your feet decade of the year award'. As a family we (I use the 'royal' we here) decided several years ago to work on being debt free. I limited her clothing budget and had informed Gabbie that her designers clothes would be coming from 'Target' this year. She was none too happy with this decision. Hence when my wife opened the suitcase and had found that Gabbie had filled it with pictures and not an ounce of clothing she was showered with tears of gratitude. And of course when all of her Aunts and lady friends at church found out what she did they took her out and proceeded to buy her all those expensive clothes. I haven't figured out if she was very, very clever or very very caring. I think both.

We were at the hotel in San Antonio through Monday and were being told that even if our house was still standing that we would probably not be back for weeks. We started getting offers from my business partners, friends and family that would stay at their home in the interim. Words cannot even begin to describe what the psychological impact is of having no place to live or the comfort in knowing that you have such loving friends and family that they would allow you to come and upend their world, which is what happens when two families collide in such a living situation.

A business associate/friend of ours had unfortunately separated from her husband. Hearing our predicament he called to inform me that he reconciled with his wife and had a fully furnished two bedroom apartment in North Austin that he was going to break the lease on instructed us to get our butts down there and move in. We did.

Pastor Ken, my pastor and head of the Children's ministry at Shoreline met us at Walmart 11:30 p.m. that night with a handful of gift cards. Knowing me all too well he gave me a wonderful piece of advice that I so desperately needed to hear.

"Art, you've sown into many relationships for the last twenty years at Shoreline and now it is time for you to reap your harvest. Reap it." When you have trouble receiving from people, like I do, circumstances can come along that will make it real simple; 'poof', you have nothing.

The realization of what was happening to our family began to finally sink in that night as we stood there in Walmart, dumbfounded as what to even begin to buy. Looking back at it now were most definitely in shock.

A week later we confirmed the fact that along with 1600 other families in Bastrop county we had lost our house. We were finally allowed in to see it about a week later and it was beyond devastating. I want to personally thank those blessed volunteers who appeared out of nowhere to console my wife as she stood and looked at the total destruction of her personal life. My son and myself who was with her (my daughter Gabbie had wisely decided to pass on the visit) had nothing to offer her at this point. We were struggling to comprehend the damage ourselves.

We had a 1996 Lincoln in the driveway whose battery was dead and therefore it burned. It just didn't burn; it melted. The hard metal rims on the car (not aluminum) melted into puddles of metal (my son and I kept them as souvenirs).  The FEMA engineer that we met with told me that for that to occur the temperature of the fire at our house probably exceeded 2500 - 3500(F).  For sustained periods of time.

The third miracle to occur was probably the most wonderful. When I was a very young man God told me he was going to make me a very wealthy man as I grew older. In my youth I of course interpreted this as meaning cold hard cash.

Anita Strychalski is a name that will always be spoken well of in the Powell family. Tasked with the job of helping us get back on our feet, she was relentless in making sure that our immediate and long term needs were being met. The church announced that if anyone wanted to help the Powell family out to please call her cell.

Her phone rang so much that for several days she had to send all the calls to voice mail just so she could use her phone. God indeed had made me very wealthy; with friends who cared and a Body of Christ who loved us.

We are indeed back on our feet. It has not been easy. We still have furniture to buy (thank you so much Caroline Domin for loaning us the furniture; we love you!). During the last six months my daughter has chosen to finish her last year in junior high in Smithville so Monday through Friday she lives with another family who are friends of ours and she is greatly missed. Our son is still trying to adjust with the fact that he will not be graduating with his childhood friends. My wife still struggles with the loss of thousands upon thousands of pictures we will never recover. My Dad was diagnosed with Kidney cancer.

We have gone through the fire. Literally. But God has pulled us through. I have had a chance to see what is inside both of my children during these trying times and I am humbled by the grace and strength I have seen both of my teenagers posses.

My teenage son was out with his friends helping to pass out supplies to victims of the fire a day after he learned that his house and all his belongings were gone.

Barely a month after the fire my daughter suffered an acute appendicitis and she posted this on her Facebook page from her hospital bed a day after the surgery:

And all this time she told us she was no good with math! This is one equation where she was entirely correct.